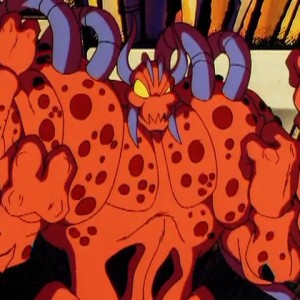 If this world perishes in the process, it’s just business.

Mutilor was the leader of a group of alien space pirates who hijacked an Aquain spaceship to steal all of the planet’s water and sell it to a race known as the Sahavi.

Physically imposing, all of Mutilor’s henchmen unquestionably follow his orders, most notably his lieutenant, Traag. At first Mutilor was unimpressed with the resistance offered by Megakat City, using his squadron of spacecraft to overpower the Enforcers. When the SWAT Kats became involved and began destroying his forces he realized his operation was under threat, and began to accelerate the water theft and moved his spacecraft to a higher orbit.

When the SWAT Kats boarded the Aquain ship and freed the imprisoned Aquains, Mutilor confronted them face-to-face, using the remainder of his soldiers to overwhelm the SWAT Kats. Mutilor towering above them, and he had them within his four-armed grasp. If Lt. Felina Feral had not intervened in a stolen alien spacecraft it is likely he would have ended the SWAT Kats’ lives.

Due to Lt. Feral’s assistance, Mutilor’s forces were now neutralized, and he fled the scene is his escape craft. The SWAT Kats pursued, making using of the recently rebuilt Turbokat’s Speed of Heat Mode. With his stolen water cargo no longer in his possession, Mutilor sought quick revenge, planning to use his escape craft’s weapons to destroy the Aquain ship and send it plummeting back to the planet, an act that would likely cause planet-wide catastrophe.

The SWAT Kats engaged Mutilor, and after an exchange of weapons fire the Turbokat was disabled, but not before Razor managed to sneak one missile past Mutilor’s defenses that lodged in his escape craft’s weapon. Certain of his victory, Mutilor fired his weapon one last time, causing the lodged missile to explode, killing him instantly.

In-Jokes: Lance Falk derived the name “Mutilor” from an unusual source: some goldfish once owned by his friend Chris Otsuki, now a director at Warner Bros. TV Animation. “Because they were such little, harmless, stupid-looking things, I gave them ridiculous, tough names.” These included Galactus (after the Fantastic Four villain), Bruno the Orangutroid , and Mutilor. “Years later, I’m doing this show and I needed a name for this big, lobster-like villain, so I named him after Chris’ goldfish because the name worked, so there’s no point in not using it.”