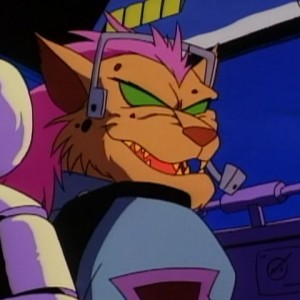 We’ll see who has the last laugh.

Termed as the “SWAT Kats most elusive adversary” and known for his redundant laughter, this criminal lived up his 5 minutes of fame to its fullest, escaping from Megakat Trade Towers in his custom made jet powered chopper. The Enforcers captured him shortly thereafter after some major help from the SWAT Kats. Chopshop was voiced by Nick Chinlund in SWAT Kats Unplugged. There exists some controversy in the fandom around whether or not he is actually a kat. Due to his unique laugh and T-Bone calling him a “laughin’ hyena,” some fans believe Chopshop is, in fact, a hyena.