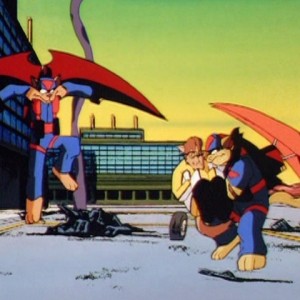 Originally these were rectangular ram-air parachutes deployed from packs the SWAT Kats wore that offered some maneuverability, used most notably to escape from a launched MASA rocket while fighting the alien Ci-Kat-A creatures. Later, these were redesigned as collapsible delta wing hang gliders that deployed from the jetpacks as an emergency means of safe descent, making it possible for the SWAT Kats to escape with a disabled Dr. Greenbox from the collapsing multi-story Zed.