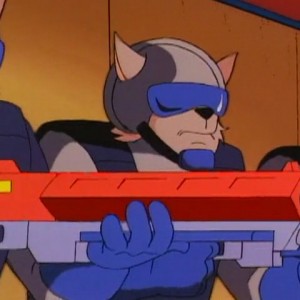 These commandos are frequently at the forefront of whatever tactical situation the Enforcers respond to.

Equipped with rifles and riot gear, these troops of Commander Feral often prove inadequate to handle the exceptional threats that plague Megakat City, though during the Pastmaster’s initial debut in modern day Megakat City, the commandos while being personally led by Commander Feral were able to stop the rampage of a summoned Megasaurus Rex, though it was at the great expense of equipment loss and injury.

In one of their most prominent appearances, the Metallikats disabled an entire squad of commandos with their bare hands at the footsteps of City Hall, leaving them severely injured.

The Enforcer tanks are commonly piloted by two commandos.