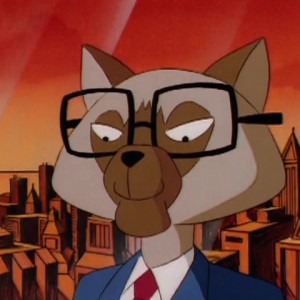 It was a bad omen to build an industrial park here. A real park is much better.

Mr. Young was the owner of a large foreign corporation who sought to invest in Megakat City.

He was accompanied everywhere two silent assistants. He usually had bad luck. When Mayor Manx attempted to persuade him to move his corporate headquarters to the Megakat Tower, their plans were spoiled by Dr. Viper’s Plantimals. After the building was nearly totally destroyed, Young politely declined Manx’s offer and left. Later, however, Manx had rebuilt the tower, and persuaded Young to return and rethink his offer, this time without his assistants.

Disaster struck again, though, when Dr. Harley Street used the tower’s penthouse as the location for the queen Ci-Kat-A’s brood. During the SWAT Kats’ battle with the queen, it landed in front of the limousine carrying Manx and Young. They were nearly deafened by its shriek, which shattered the windows, and then a chunk of flaming debris crushed the insect, splattering Manx, Young and their driver in its guts. As Young frantically attempted to clean himself off, a dejected Manx told the chauffeur to take them back to the airport.

Later, Young teamed up with Manx again to open an industrial park on Anakata Island. When an island warned them not to disturb the sacred talisman stone, lest they awaken the demon Volcanus, Manx ordered the construction workers to bulldoze the stone anyway. However, after conferring with his assistants, Young pleaded with Manx to carefully move the stone because it was sacred to the natives, and should be preserved. Manx relented, but the bulldozer driver didn’t hear his order to stop, and the stone was crushed anyway.

Volcanus was freed from his volcano prison. Young and his assistants then joined Manx and the islander who’d warned them in fleeing to the mainland in Manx’s private speedboat. Following Volcanus’ defeat, Young decided to scrap his plans for an industrial park, instead opening a real park, open to the public.