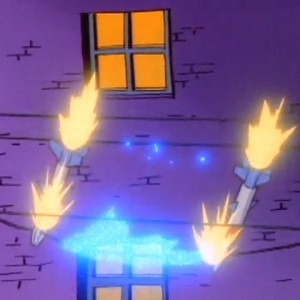 Whatever’s inside won’t be able to arc out. - Razor

Special insulated missile developed by Razor that worked in pairs and opened up in a “wire clipper” fashion, cutting through wires and trapping electrical entities.

Used in tandem with the Turbokat’s Surge Detector targeting system to capture Hard Drive in his energy form as he traversed through Megakat City’s power lines.

The Wire-Clipper Missile containing Hard Drive was taken into Enforcer custody, but was later stolen by Dark Kat’s Creeplings.

Dark Kat then shorted the missile by hand, disabling it, and allowing Hard Drive’s exit.