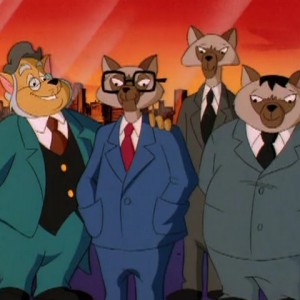 My associates and I feel that if this stone is part of island tradition, it should be carefully moved. - Mr. Young

Foreign businessman Mr. Young is almost always accompanied by a pair of associates, who appear to be his advisors or assistants.

Neither one is ever identified by name, and they never speak. One is tall and thin, the other is short and fat and has black hair. Like Young, they appear to be avid golfers. The only time Young was seen without at least one of them was when he flew to Megakat City for a second attempt to buy the Megakat Tower.

Lance Falk has confirmed that neither of Mr. Young’s associates is named; in the script for Destructive Nature they are simply referred to as “Two silent associates.”

Warning: mysqli_query(): MySQL server has gone away in /home/felinaferal/public_html/subdomains/swatkats/wp/wp-includes/wp-db.php on line 1924