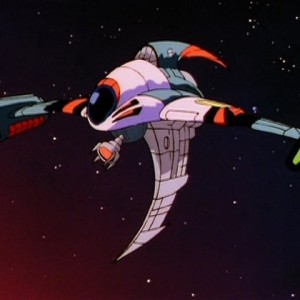 Razor! You’ve gotta put that mega-beam laser out of commission, before he takes us apart. - T-Bone

This high speed heavily armed craft, presumed to be Mutilor’s personal spacecraft, was used by Mutilor to escape the Aquain mothership in an attempt to destroy it and send it crashing back down to the planet, an act that would have catastrophic worldwide consequences. The SWAT Kats pursued with the Turbokat and engaged Mutilor, exchanging fire, and very narrowly defeated the space pirate with a missile barrage.