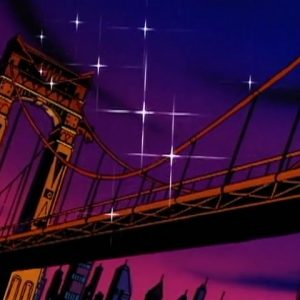 A suspension bridge spanning Megakat Bay. The SWAT Kats fought Madkat on the bridge while attempting to prevent him from capturing “The Knight,” a.k.a. Commander Feral, but failed to do so.

Later, the Pastmaster reappeared on top of one of the bridge’s suspension towers in a trap laid for the SWAT Kats. Felina Feral attempted to climb up and arrest him, disobeying her uncle’s orders, but the evil wizard knocked her off. She would’ve fallen to her death if the SWAT Kats hadn’t appeared and rescued her.

After the SWAT Kats set Felina down safely onto the bridge, the Pastmaster brought one of the bridge’s gargoyles to life in order to grab the Turbokat and fling the vigilantes into a dark future world he’d created just for them. In this future, Megakat City was Metallikat City, ruled by Mac and Molly Mange, and Old Megakat Bridge had been drastically redesigned along with everything else to be entirely metallic. In the bridge’s case, it was capable of transforming from an ordinary bridge into a giant robot.

In the unfinished episode Turmoil 2: The Revenge, Old Megakat Bridge is completely destroyed by Turmoil using the Mega-Beam, which melts the structure.