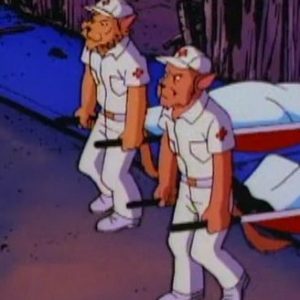 Paramedics are kats who respond to emergencies and given medical treatment to those in need. Two paramedics carted away the dead body of Dr. Elrod Purvis after he died attempting to steal Viper Mutagen 368. Several paramedics, along with fire fighters, responded to the fire which destroyed the Megakat Tuna factory after Mac Mange’s exploding cigar set it ablaze. They tended to the wounded survivors of the fire. Paramedics also gave treatment to the elderly couple apparently injured when one of Razor’s missiles accidentally hit and destroyed a warehouse on the couple’s jogging route, taking the pair to the hospital, not realizing they were not only not actually injured, but not even elderly, being young kats in masks hired by Dark Kat to frame the SWAT Kats for injuring innocent bystanders.

Paramedics would’ve appeared in the unfinished episode Succubus!, removing the corpse of a dead Megakat Power and Light worker from an alley after he’d been drained of his lifeforce by Katrina Moorkroft.