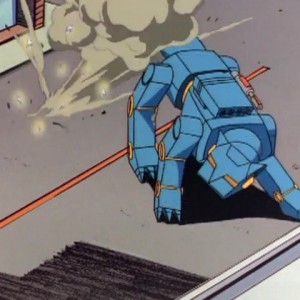 The smaller of the two Macrobots Professor Hackle designed for MASA. Unlike its counterpart Goliath, it walked on all fours. Molly Mange took it over when she and Mac broke into Puma-Dyne. However, her control over it was brief, as Razor used a Delta Bak Pak to board the vehicle, forcing her to abandon Prowler and join her husband in Goliath. Taking over the controls of Prowler himself, Razor battled the Metallikats in the other Macrobot, climbing to the top of the Megakat Trade Towers. When the Metallikats followed, Razor set Prowler on autopilot, sending it crashing into the other robot with the Metallikats in it, knocking both Macrobots off of the roof. They fell into a nearby park and were destroyed.