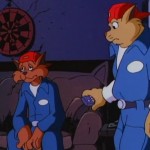 Dark Kat: Clumsy fool! That super conductive cable is a vital element in my plans! Soon, all the pieces will be in place and I will finally have the power to destroy Megakat City.

Roger that. Chopper One on its way.

Dark Kat: Relax my Creeplings. Nothing can stop us now.

Chopper One: Stay where you are, you’re under arrest! No way to catch him, he’s too fast.

Razor: But not too fast for us, hey bud?

T-Bone: Only one way to find out!

Dark Kat: The SWAT Kats. Just as I anticipated. The game of Dark Kat and mouse begins.

Razor: Stay on him T-bone!

T-Bone: He won’t shake this tail!

T-Bone: Steady Razor. I’ll get us close enough for a second shot.

Radio: This is Chopper One. We need paramedics in sector 12. We’ve got civilian casualties in a collapsed warehouse.

T-Bone: Doesn’t sound good…where’d he go? Cripes, we lost him!

Razor: Maybe we should double back to that abandoned warehouse. I guess it wasn’t so abandoned…

Fire Fighter: Careful, over here! Put out that fire!

Ann Gora: This is Ann Gora of Kat’s Eye News, live from the site of a spectacular disaster . We’re with the victims of the accident. Can you tell us what happened?

Old Man: We was just passing by on our evening walk when boom, the whole place dropped down on us. (coughs)

Ann Gora: Commander Feral, have the Enforcers determined how this accident occurred?

Commander Feral: This was no accident. It was the work of those irresponsible SWAT Kats.

Commander Feral: The SWAT Kats are dangerous vigilantes. A menace to society.

Razor: But, it was an accident.

Commander Feral: There they are now, returning to the scene of their crime.

Razor: Maybe we should go down there and try to explain.

Commander Feral: You can run but you can’t hide, SWAT Kats. If it’s the last thing I do, I swear to bring those kats to justice!

Ann Gora: There you have it viewers, our Kats Eye News exclusive report. Again, two innocent civilians have been seriously injured, apparently the result of the misguided missiles of the SWAT Kats’ jet.

Chance: Give it a rest, Jake.

Jake: I still can’t believe I hurt those people.

Chance: Hey, I feel bad too, but what are we supposed to do? We were in pursuit of a dangerous criminal.

Jake: But I’m the one who fired.

Chance: But it was an accident.

Jake: I guess you’re right, but I can’t help thinking I should’ve done something different. Hey, what’s that?

TV: We interrupt this program for a special bulletin. Enforcer patrols report a break-in at Katalytic Laboratories. They are surrounding the building and awaiting additional air support. This is apparently the work of the same intruders who earlier robbed Megakat Super Conductors.

Chance: Looks like we’re gonna get another shot at this guy. Let’s roll!

Dark Kat: With this MegaKatalytic Converter I’ll have everything I’ll need to reduce Megakat City to rubble. From the ashes will rise Dark Kat City, my capital of crime!

Commander Feral: Whoever you are, you’re going to pay for this. All choppers, move in!

Dark Kat: This will slow them down. So much for the Enforcers…the SWAT Kats!

T-Bone: You won’t get away from us this time, buddy! It’s all yours, Razor. Take him down!

T-Bone: What are you waiting for?

Razor: What if I miss? I can’t risk hurting someone else.

T-Bone: You’ve got to stop blaming yourself!

Dark Kat: He who hesitates is lost!

T-Bone: So am I. You’re so worried about hurting someone else you almost got us killed!

Think I got most of this crud out of the engines.

Well, then you won’t be needing me for awhile.

Hey! Where are you going?

I don’t know…out. I need to be alone. To do some thinking.

You’ll handle it better without me. I’m just putting you and innocent civilians in danger.

Razor! Wait! Aw, crud. I don’t blame him for being a little rattled. We never hurt anyone before. How the heck could two Octopus Missiles that hit the top of the building blow up the bottom?

T-Bone: The answer must be here somewhere. (grunts as is hit)

T-Bone: What are you doing here?

T-Bone: Then you don’t believe our missiles brought this place down either.

T-Bone: This building was rigged to blow!

T-Bone: I knew it. We’ve been framed!

Dark Kat: (laughs) I’m almost ready to strike. Now, to find some power to complete the conversion of my Black Widow.

TV: And behind curtain number three is a year’s supply of hairball eliminator!

Razor: I hope I’m not disturbing you?

Old Man: Hey, it’s one of those SWAT Kats who bombed that building!

Razor: I…I came to apologize. I didn’t mean to hurt anyone.

Old Man: And now you want us to forgive you?

Razor: I don’t know what to say…

Old Man: Don’t say anything, sonny, just get out!

TV: We interrupt this program with a special bulletin. These pictures are being broadcast live from a Megakat City electric substation, where the Enforcers are engaged in an all out war against the mysterious spider craft.

Enforcer: Watch out, move it!

Razor: I’ve got to help.

Razor: Dark Kat, who said anything about Dark Kat?

Old Man: Uh, the newscaster did!

Razor: I don’t think so.

Old Woman: You and your big mouth. He’s on to us!

Razor: So, this was all a setup?

Old Woman: And it worked. Too bad you won’t survive to tell anyone!

Old Man: Dark Kat will pay us extra to get rid of you permanently!

Razor: I know! Fastest Glovatrix in the west.

Razor: Is there a doctor in the house? Book ‘em.

T-Bone: Razor, come in. This is your partner calling. Crud! What a time to go solo. What the? Power’s out, controls won’t respond!

Dark Kat: The SWAT Kats are finished. All that’s left is to plug in to the main electrical grid. Then the power to destroy Megakat City will be mine!

T-Bone: Dark Kat! So, you’re beind all this?

Dark Kat: And there’s nothing you can do to stop me! Seems the spider has caught the fly.

T-Bone: Gotta break free…it’s not working. What the, Razor?

Razor: You miss me, buddy?

T-Bone: Roger that. Now get your tail up here!

Razor: On my way.

T-Bone: Good to have you back in the saddle again, partner.

Razor: Same here, bud. Now, let’s take Dark Kat down once and for all.

Razor: And the Enforcers can’t stop him!

Commander Feral: I’ve got bigger things to worry about, Felina.

Dark Kat: Nothing can stop me now!

Razor: Looks like Dark Kat’s absorbing all the power from Megakat City. We’ve got to cut his power source. Head for the Mega Transformer Tower.

T-Bone: You’re only gonna get one shot, buddy.

T-Bone: Now that’s what I call cutting the power!

Dark Kat: You’re too late SWAT Kats, I’ve already got all the energy I need to destroy Megakat City!

Dark Kat: Now watch as I pound this city into dust! (laughs)

T-Bone: Razor, we’ve got to do something!

Razor: He’s heading through Megakat Park. I’ve got an idea! Gotta get that thing into the water.

T-Bone: But he’s not heading for the lake!

Razor: We’ll bring the lake to him!

T-Bone: Razor, if your plan is to short circuit that monstrosity, it ain’t working!

Dark Kat: No! We’re short-circuiting! Shut down all systems!

T-Bone: Looks like you got your edge back, Razor.

Felina Feral: Hold it right there.

Commander Feral: You’re all under arrest. Where do you think you’re going?

T-Bone: To get Dark Kat!

Razor: Don’t worry, we’ll bring him in for you!

Dark Kat on Monitor: You may have won this battle, SWAT Kats, but I’ll be back. In the meantime, I’ve left you a little gift. (laughs)

Felina Feral: The ship is wired to self-destruct!

T-Bone: Well when does, we’ll be waiting.

Razor: Both of us. Count on it.