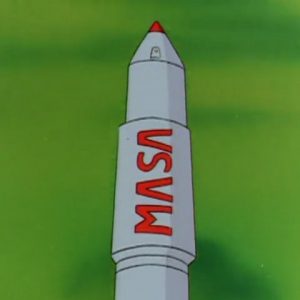 Rocket used by MASA, set to fire from Launch Pad 3. Ann Gora and Jonny K. hid inside of it while fleeing from a group of Ci-Kat-A drones and two mind-controlled guards. The SWAT Kats found the two hiding inside and were promptly attacked by two Ci-Kat-A, one of whom was thrown out. The other became sealed inside with the four kats.

Observing from the control room, Dr. Street asked for the queen Ci-Kat-A’s permission to launch the rocket despite the presence of one of its offspring. The alien earnestly gave its permission, and Street sent the rocket firing into the sky. The SWAT Kats, carrying Ann and Jonny, leaped to safety and glided back down to MASA using their Delta Bak Paks, allowing the Ci-Kat-A, still aboard the rocket, to be launched into space.

Another rocket appears in the unfinished episode Turmoil 2: The Revenge. It is used to launch Puma-Dyne’s Mega-Beam into space, however before liftoff, Turmoil’s lieutenant, disguised as a MASA technician, alters the circuitry of the Mega-Beam, allowing Turmoil to remotely control it from her Cloud Fortress.