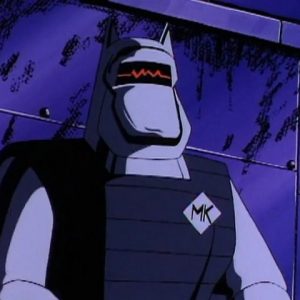 Resistance will be met with termination.

Katlike robots developed by Professor Hackle, these machines served as a peaceful and benign workforce in the future Megakat City. They primarily served as construction workers and cleaning staff, controlled from a central robot control matrix. They were reprogrammed to become evil, however, when the Pastmaster brought the Metallikats back to life and taught them how to use the control matrix.

The robots served as Mac and Molly’s mindless enforcers, capturing and enslaving the citizens of Megakat City, forcing them to build the gangsters’ fearsome Metallitack Units with which they killed the SWAT Kats, defeated the Enforcers and took over Megakat City and renamed it “Metallikat City.” The robots continued serving as guards and enforcers in Metallikat City, rounding up any and all “non-metallic lifeforms” they came across.

The SWAT Kats from the past fought against them numerous times during their effort to overthrow Mac and Molly and free the people of the city. The robots were presumably returned to normal after the vigilantes severed the control matrix’s connection, causing them all to switch off without the Metallikats controlling them.