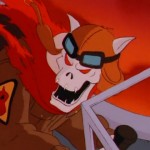 Doolittle: Come on now, a little muck never slowed you down before…

Doolittle: Got a hold of something big…whuh?

Doolittle: Not just any plane, sonny, it belonged to the greatest pilot who ever lived.

Doolittle:He was no hero, sonny. He was the most evil kat who ever took to the air: The Red Lynx.

Ann Gora: Yes, according to Megawar II veteran Abner Doolittle, this is believed to be the plane flown by the infamous Red Lynx. It was Abner’s crane that dragged the plane from its watery resting place where it has remained since being shot down in one of the greatest air battles of the war.

Doolittle: Yep, saw it with my own two eyes.

Jake: Think you can stop laughing long enough to spot me?

Chance: Sure, the show’s over anyway.

Doolittle on TV: Yep, the Blue Manx, and his archenemy, the Red Lynx were going at it tooth and nail, ‘til there was only one left in the air

Doolittle on TV: Yep, the Red Lynx was the greatest pilot in Megawar II.

Chance: You ain’t kidding old-timer, even if he was on the wrong side

Ann Gora on TV: So, this aviation antique will be moved to Megakat City Museum of History for further study and display.

Chance: That’s the Red Lynx’s plane! We can go see it, buddy! (gasp)

Chance: What’s the matter, too proud to ask for help?

Jake: (cough) A few more seconds and I might’ve been as extinct as the Red Lynx.

Chance: I can’t believe that I am going to get a chance to see the Red Lynx’s plane. (puts in a tape into the VCR)

Tape: So, come share with us the greatest dogfights of Megawar II

Jake: Aww please, Chance, not this one again. You’ve seen this tape at least 100 times.

Tape: There’s the Blue Manx, and there’s his enemy, the Red Lynx.

Chance: This stunt fooled them every time.

Jake: Chance, aren’t you forgetting that the Red Lynx was the most evil pilot in history?

Chance: Yeah, he was a bad guy, but he was also the baddest pilot around. Well, next to the Blue Manx of course.

Red Lynx: Time to settle an old score. (laughter as he flies into the sky) Manx! My mortal enemy! (shoots a Manx billboard).

Callie: “And, if re-elected, I mayor Manx promise to dedicated myself to serving Megakat City.” (yawns, reading speech out loud) I wish he’d dedicate himself to writing his own speeches. “You see, there’s a long tradition of bravery and courage in the Manx family, which is why I’m proud to christen this new jet the Blue Manx, in honor of my great grandfather…” (gasps and ducks as Red Lynx opens fire on the Mayor’s office)

Red Lynx: End of the line, Manx! And now, for the coup de gras!

Red Lynx: That’s not Manx, and it’s Manx that I want!

Callie: That looked like the Red Lyn’s biplane, but it can’t be! Well, whoever he is, he’s in big trouble.

(Red Lynx leads Enforcer choppers on a chase, outmaneuvering them)

Chance: But the Red Lynx is dead.

Chance: We’re on our way.

Manx: Ah, that Callie, simply amazing. She’s finished my dedication speech already. I hope she remembered to put in that business about courage and bravery. Not to mention, honesty…(unsuccessfully taps golf ball to hole with his foot after checking to make sure no one is looking)

Manx: You’ll have to speak up Callie, I can’t hear you-(gasp)

Manx: What do you want with me, don’t you know who I am?

Red Lynx: I know just who you are, and I’ve waited a long time for this, Manx! (laughs)

T-Bone: Did you see those moves? That guy really is the Red Lynx! I shoulda seen in coming! I’ve studied every one of the Red Lynx’s moves.

Razor: Well did you study his disappearing act? Because I’ve lost him on radar.

Red Lynx: (via radio) It’s not over yet, Manx! (laughter)

Manx: If only great grand dad hadn’t shot down the Red Lynx. Now that evil ghost is after me!

T-Bone: The Blue Manx was a hero, Mayor.

Commander Feral: There’s not need to worry, Mayor. My Enforcers can protect you from some old Megawar II pilot.

Manx: Yes, of course…but will you SWAT Kats be there?

Manx: Very well then, I shall go.

Callie: Guess you do have some of the courage and bravery of the Blue Manx, Mayor.

Manx: Yes, well, it’s all in the genes, and I owe it all to great granddad. And besides, it’s probably bad to cancel a public apperance this close to election day.

Dr. Sinian: How the Red Lynx came back to life is a mystery to me, Callie. It’s positively supernatural. Maybe his hatred for the Blue Manx never died, even though his body did.

Callie: Great, how do we kill a ghost?

Dr. Sinian: I don’t have an answer for that one yet. I’ll keep checking and let you know as soon as I find something.

Callie: I just hope it’s not too late for Mayor Manx.

Manx: My Great Grandfather was one of the greatest pilots of Megawar II, but I wish he could have flown this brand new Enforcer jet that does everything but vote. (laughs) Laugh it up!

Callie: Where are those SWAT Kats?

Commander Feral: Who needs them, Deputy Mayor? My Enforcers can handle anything, and that new jet is going to make the SWAT Kats obsolete.

Manx: There’s a long tradition of courage and bravery in the Manx family, which is why-(gasps as biplane flies into view)

Manx: Sorry! Women and mayors first! (rushes past Callie and knocks Feral into the water)

Red Lynx: (laughs) This Manx isn’t even a worthy opponet!

T-Bone: T-Bone and the Red Lynx, face to face, and he blinked! Just gotta love this guy’s moves, Razor.

Razor: This dead guy is some flyer.

T-Bone: I’ve been telling you that for years, buddy.

Razor: Uh, not completely. (missile blows up a jeep and sends Feral flying back into the water)

T-Bone: That does it, this guy’s dead meat!

Razor: Tell me something we don’t already know.

Red Lynx: Fools! You can’t stop me! (crashes into the bay)

T-Bone: The old ghost was good, but old T-Bone was better.

Razor: Hey, you also had a little high-tech edge with the old Turbokat.

T-Bone: Razor, it’s the pilot, not the plane.

Razor: If I agree with you will you promise not to watch that old tape again?

Manx: Well, it’s all over folks. The SWAT Kats have taken care of things. Now where was I? Ah yes. There’s a long tradition of bravery and courage in the Manx family, which is why I’m proud to christen this new jet, the Blue Manx in honor of my great grandfather.

Commander Feral: (pats the Blue Manx Jet) A pity you didn’t have a chance to show up those SWAT Kats today but you will. Guard it well.

Enforcer Commando #1: What is it? (seeing bubbling in the water)

Red Lynx: (laughs and takes off in the Blue Manx Jet)

Enforcer Commando #2: Get away from there!

Red Lynx: And now Manx, you will join me in the grave! (laughs)

Commander Feral: WHAT?! How could you let a multi-billion dollar jet get hijacked? I want it found NOW! (slams car phone down)

Manx: Mmmm, have I mentioned I’m running for re-election? (eating a hotdog) Good to see you, cute baby. Can I buy you lunch? Here, take a button! No need to thank me.

Callie: Thanks for fixing the window. Now I have a perfect view of Mayor Manx working the voters.

Dr. Sinian: Callie listen. I think I found out how to destroy the ghost pilot.

Callie: Thanks anyway, Abby. But the SWAT Kats have already taken care of him. Now all I have to worry about is the Mayor’s next speech- (gasp)

Callie: On second thought, how do you kill a ghost? (screams)

Manx: The Red Lynx! In the Blue Manx!

T-Bone: I was almost sorry to see the Red Lynx go down.

Callie: SWAT Kats! The Red Lynx is back and he’s flying the Blue Manx Jet!

Callie: I’m going to go get the Mayor! According to Dr. Sinian the only way to stop the Red Lynx is for a relative of the Blue Manx to shoot him down.

Red Lynx: (laughs) This is almost too easy!

(The Turbokat comes into view)

Red Lynx: You’ll have to do better this time!

T-Bone: Razor, can you get a lock on this guy?

Manx: That ghost means to kill me, Callie!

Yes, and you’re the only one that can stop him.

Me? Then we’re doomed! Doomed I tell you!

Red Lynx: (laughs) Manx is mine!

T-Bone: Over my dead body!

Callie: Better let me drive Mayor. I know just where to find you something to fight back with.

T-Bone: What’s Callie doing? She and Manx are sitting ducks down there! Crud!

Razor: Maybe Manx really is the only one who can bring down the Red Lynx.

Callie: It’s up to you now, Mayor (shoving Manx into the aircraft carrier’s artillery turret)

Red Lynx: It’s just you and me now, Manx!

T-Bone: Now how can he shoot down the Red Lynx?

Razor: With our help! (launches down in the Cyclotron) Ready to try again, Mayor?

Red Lynx: (seemingly shoots down the Turbokat) You were no match for the Red Lynx!

T-Bone: You must be getting old, Lynx! Falling for one of your own tricks!

(Manx bolsters his courage and fires again, shooting the Red Lynx down)

Chance: As Razor would say, bingo!

Manx: Is he gone?

Manx: Oh, it’s all in the genes my boy. After all, I am the great grandson of the Blue Manx, and I hope to have your vote on election day. You are registered, aren’t you? (pings a large button on Razor)