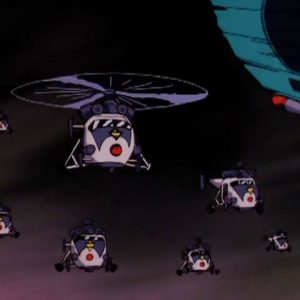 The epicenter of the mysterious tremor has been pinpointed in the Megakat Mountains, east of the city. Unit One, Mountain Sector, check it out. - Enforcer Dispatchers

A squadron of Enforcer choppers who patrolled the Mountain Sector outside of Megakat City. Following reports of mysterious storms and tremors, the squadron was sent to investigate. They encountered two giant mummies attacking a bus full of innocent tourists. The lead pilot attempted to make them surrender, only to have one of the mummies throw the bus into the midst of the choppers, destroying one of them. He hurriedly informed Enforcer Headquarters of the situation.

The SWAT Kats arrived and shot the mummies using the Turbokat’s cement machine gun, seemingly incapacitating them. The lead pilot angrily told the SWAT Kats to back off, prompting them to leave, as they had to take Dr. Sinian and her assistant Henson back to the museum. However, as the lead pilot flew over to where the mummies lay covered in the cement, they broke free. One of them grabbed his chopper and flung it violently against the mountainside, killing him and his co-pilot. The fate of the rest of Unit One is unknown.