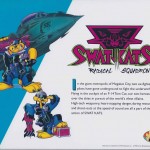 Official posters and other printed collateral about SWAT Kats.

Oh, the bitter irony of that first poster that said that SWAT Kats was the #1 New Syndicated animated show of 1994 and promised more action in 1995. You did claw your way to the top, but unfortunately you had the pile whipped right out from underneath you. Turner had something really good on his hands and he dumped it for Captain Planet of all things. Add SWAT Kats to the extremely long list of shows that were screwed by the network. Such a tragedy.

Thanks for Archiving the flyer ^^

Too bad they never made any other seasons of this. I’d love to see them start cranking out new episodes.

Well, that first one wasn't strictly a poster- it was used as a full page ad in a special kids' TV issue of Broadcasting magazine (now Broadcasting & Cable)- there's a site with scanned archives of all those mags.