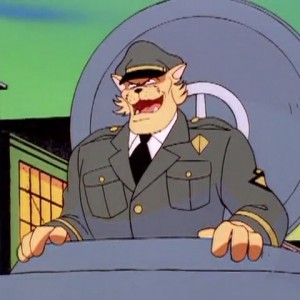 A second Enforcer sergeant aside from the one usually seen with Commander Feral. He told Lieutenant Commander Steel – briefly in command of the Enforcers after Madkat had captured Feral – that “that kat who got robbed” (Katzmer) had been waiting to see Steel all day. Steel dismissively told him to fill out a form, but the sergeant let the old shopkeeper in, anyway. When Madkat attacked the building in his giant octopus form to abduct Callie Briggs, he knocked Steel into the SWAT Kats, Katzmer and the Sergeant, knocking all four to the ground.

Later, following the destruction of Megakat Biochemical Labs, which Feral blamed on the SWAT Kats, he told this Sergeant that “if they set one claw in this town,” he wanted them arrested. The Sergeant later used a tank to battle the Metallikats after they robbed a bank, relishing the thought of destroying them for good. However, they rammed his tank with the Metallikat Express, knocking it over onto some approaching Enforcer sedans. The Sergeant was able to leap free in time.

For years it was thought this character was same Enforcer Sergeant seen in other episodes, just with a rather unusual redesign for two episodes. The fact that when Jim Cummings took over the role of the regular Sergeant from Ed Gilbert in season two, he used the same droll, droning voice for him as he had for this Sergeant, added to the confusion. In the end, though, storyboards for Enter the Madkat identify this character as “Sergeant #2” and advise he animators to “see correct model.” In the storyboards, the only difference between him and the regular Sergeant is that he has a mustache. His final character design would of course differ much more from his colleague.