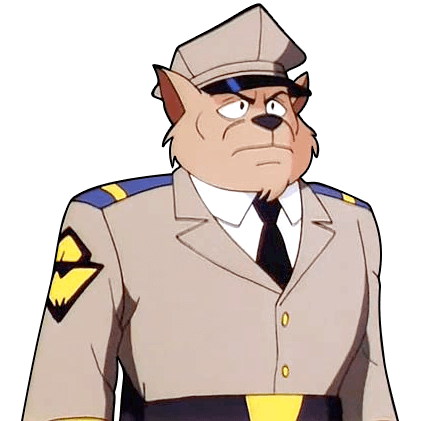 Commander! The Metallikats are tearing up downtown!

The Enforcer Sergeant was an able-bodied and loyal Enforcer officer, never identified by name. He is usually seen at Commander Feral’s side. The Sergeant is completely loyal to Feral and always follows his orders without question. A kat of few words, the stern Sergeant normally says nothing more than, “Yes sir!” in response to Feral’s commands.

The Sergeant assisted Feral in trying to solve the mystery of the missing body of Dr. Elrod Purvis. He failed to get much out of the morgue attendant because he was in shock. It was later revealed that Purvis had been revived as the mutant Dr. Viper.

Later, he tried to arrest the Pastmaster as he came out of the Megakat City Museum of History with the Tome of Time, and was almost stepped on by a Megasaurus Rex for his troubles when the sorcerer summoned the huge dinosaur out of a time vortex.

He was at Feral’s side during the siege of the Megakat Tower.

During Mutilor’s attempt to steal all of Megakat City’s water, the Sergeant was dispatched to personally look for the missing Felina Feral, but although he only found her crashed jet and bazooka. He solemnly returned the latter to his Commander, thinking Felina was dead, although it turned out later she’d survived.

During Dark Kat’s attack against the city with his Black Widow, the Sergeant and several commandos arrived at Megakat Memorial in response to a disturbance, thinking the lives of the injured elderly couple there were in danger, only for Razor to reveal they were not only not injured, but not even elderly, handing the duo over to the Sergeant and his men to be arrested.

A version of him (like Feral and Felina, unchanged) exists in the alternate universe.

Since then the Sergeant has played only minor roles in the Enforcers’ efforts to protect Megakat City, all but replaced by Felina as Commander Feral’s most trusted aide. Nevertheless, Feral continues to rely on him because of his competence and dependability.

Like many characters, he was slated to appear in the unfinished episode Succubus!, where he would’ve assisted Felina in her investigations and found the dead body of dockworker Geno Furness in the river.

There is a second Enforcer Sergeant who only appears in Enter the Madkat and Katastrophe. For many years, it was thought that this was the same character, just redesigned for inexplicably only two episodes. However, storyboards for Enter the Madkat confirm it’s a different character.

In Metal Urgency, Feral at one point addresses an Enforcer commando as “Sergeant.” According to the script and storyboards, it was supposed to be the Sergeant and another officer inside the tank. Since only Feral escapes before the out-of-control Behemoth runs the tank over, the Sergeant was killed in this scene in the script. However, bizarrely, he still appears later on in Feral’s office. To fix the continuity error, the Sergeant and officer in the tank were changed to two generic commandos, although Gary Owen’s dialogue referring to the Sergeant was never altered, making it a blooper.

Another instance of the Sergeant being replaced during animation is in The Pastmaster Always Rings Twice; in the final draft, he is commanding the blockade by the tar pits before Feral arrives. In the finished episode, however, the Sergeant is replaced by a commando. And in the final draft of The Origin of Dr. Viper, he and a commando were supposed to accompany Feral to Megakat Biochemical Labs, but in the finished episode, he was replaced by a second commando.