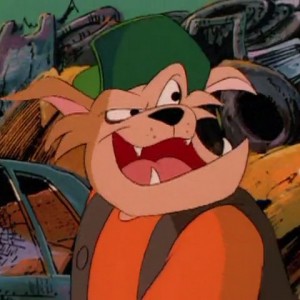 Problems, guys? Maybe we can add to ‘em!

Murray is the brother of Burke. Their job is to deliver scrap to the Megakat City salvage yard. Being a bully, Murray takes very available opportunity to taunt Chance Furlong and Jake Clawson, whom he and Burke were assigned to watch by Commander Feral. A kat of small stature, Murray’s left eye is larger than his right one for some reason. In all three of his appearances Murray was voiced by Charlie Adler. His being Burke’s brother was never mentioned in the series but stems from early promotional material.