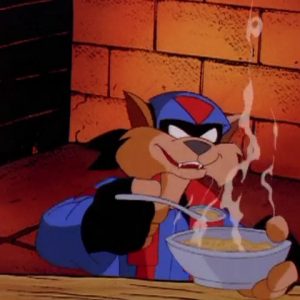 Pepper stew was a food eaten in Megalith City. It was an incredibly spicy stew which newcomers were often unaccustomed to. Following the SWAT Kats’ defeat of a giant cyclops, Queen Callista served bowls of the stew to “Sir Razor,” who found it delicious, but was grateful for the large goblets of milk which were also provided so as to wash down the stew’s “mega-afterburn.” When two other cyclopes attacked the city later, the SWAT Kats used a large cauldron of the stew dangling from the Turbokat’s undercarriage to pour onto one of them. Blinded by the hot, spicy stew, the cyclops staggered backwards off of a cliff and fell to his death. After Callista used her magic to send the vigilantes back to modern times, they used the remaining stew against an oil-sucking eel which was attacking another KatCo oil tanker.