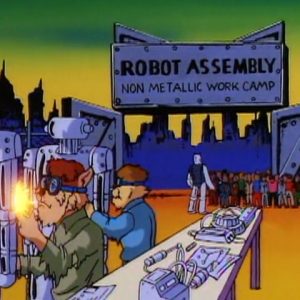 You’re coming with us! It’s the assembly plants for you! Resistance will be met with termination! - Robots

In the future world where the SWAT Kats had died and the Metallikats had taken over Megakat City, turning it into “Metallikat City,” the salvage yard was converted into a work camp for “non-metallic creatures” (i.e. enslaved citizens) to be imprisoned, where they were forced at gunpoint by robotic guards to build the Metallikats’ weapons of war. The camp and others like it were liberated when Professor Hackle used the Central Robot Control Matrix to reprogram the Metallikats’ robotic forces.