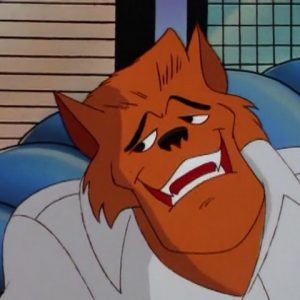 I should've been the King of Late Night!

A failed comedian and rival of David Litterbin’s. After suffering a mental and emotional meltdown, he was committed to the Megakat Asylum. He was tormented nightly by a guard who was a fan of Litterbin’s and watched his show right outside of Ringtail’s cell. One night, when the power went out, Ringtail managed to get out of his straitjacket. Overpowering the guard, he escaped from the asylum, and hid from the patrolling Enforcers inside of an antique shop called Katzmer’s Curios. Here, he discovered a kat-in-the-box whose face greatly resembled his, and became intrigued by it.

The owner came in, and Ringtail pressed him for more information about the old toy. The owner, Katzmer, explained that it’d once belonged to a medieval jester named Madkat who went insane after another, funnier jester took his place. A darkly amused Ringtail laughed and said he could related to that. Katzmer added that Madkat was imprisoned due to his insanity and swore vengeance not only against the jester who took his place, but also against the reigning king and queen and the leader of their knights. Obsessed with the toy, Madkat tried to take it. Declaring that it wasn’t for sale, Katzmer attempted to fend the lunatic off with a baseball bat, but Ringtail simply broke the wooden bat in half with a madman’s strength and threw the shopkeeper aside.

Suddenly, the kat-in-the-box started laughing and began talking to him! Startled, Ringtail, who before now had maintained his sanity, began to truly wonder if he was insane after all. The toy, possessed by the spirit of Madkat himself, told him he was insane, and suggested they join forces “for revenge against all our enemies.” For Ringtail, this meant David Litterbin specifically, while for Madkat, it would mean proxies for the king, queen and knight. Drawn to the haunted toy’s power, Ringtail agreed without a moment’s hesitation, and allowed Madkat’s ghost to possess him.

Later, after Madkat was defeated by the SWAT Kats, the haunted kat-in-the-box and Ringtail were separated into two distinct beings once again. Despite an initial attempt to escape on foot with the evil toy (declaring, “I’d be crazy to give this up!”) which resulted in him being knocked out by Razor and Commander Feral, Ringtail eventually recovered some of his sanity and reconciled with David Litterbin, who even allowed him to appear on his show to promote his upcoming autobiography, Madkat and Me.