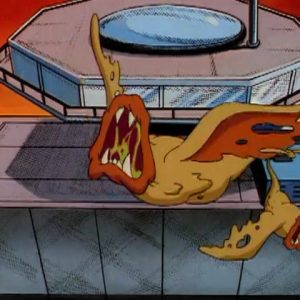 T-Bone’s nickname (along with “flying cabbages”) for Dr. Viper’s type of Plantimal which could fly. In addition to being capable of flight, the winged mutants could vomit a corrisive acid which could melt through metal, including the SWAT Kats’ missiles and even an Enforcer chopper. Their primary role in Viper’s plan was to guard the rooftop of the Megakat Tower, the penthouse in particular, and defend the spore pod. Like all of the Plantimals, they died when Razor detonated a canister of super rocket coolant on top of the building, freezing them solid (in their case, in midair as they pursued the Turbokat).