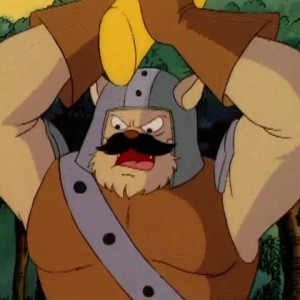 The Dragon Sword! My Queen, could he be the one foretold?

Tabor, a tough warrior who was loyal to his queen, was leader of the guards who defended Megalith City and served Queen Callista, and possibly the ancestor of Commander Feral. He was the first to suggest that Razor might be the one foretold by legend who would save them from the Pastmaster, when he pulled the Dragon Sword from the stone. Despite this, he was shown to have little faith in the SWAT Kats’ abilities at first, as when he and Callista were trapped by the Pastmaster’s cyclops at the edge of a deep gorge near Megalith City, he sarcastically asked, “Now where’s our ‘legendary hero?'”

He moved to use himself as a shield to protect his ruler from the cyclops, but the SWAT Kats intervened before he needed to sacrifice his life, tying up the cyclops’ legs, causing him to fall to his death in the gorge. Seeming to be impressed with the duo, he asked them their names, his opinion of them changed somewhat, although he seemed to consider “T-Bone” and “Razor” unusual names, as they left him scratching his head. Later, after the two time travelers were invited into the castle, Tabor was disappointed when they turned down Callista’s offer of a grand feast in their honor, preferring to have just “a six pack of milk.” Deciding to honor their rescuers’ wishes, Callista instructed Tabor to prepare a private meal for just her and Razor.

Tabor was never seen again after leaving to prepare two goblets of milk and bowls of pepper stew, and he was not among the guards attacked by the harpies during Callista’s abduction, nor during the cyclopes’ assault against the city walls. His ultimate fate is unknown.

His name is never mentioned in the episode, but was given on the model sheets for Bride of the Pastmaster.