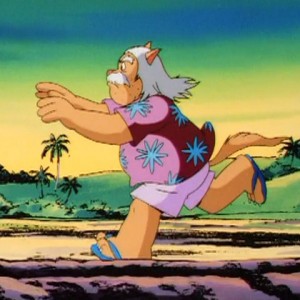 Wait! You fools don't know what you're doing!

The manager of the Megakat Mint. When the Metallikats broke in hoping to “cut out the middleman,” the manager tried to prevent them from entering the vault, pressing himself against the door and insisting it was impossible to get inside. However Molly, insisting she and Mac were “in a hurry,” aimed her multi-weapon at the vault door and fired. The manager was barely able to get out of the way in time.

The Megakat Mint was where all of the money used in Megakat City’s banks was minted. The Metallikats broke into it hoping to “cut out the middleman” and steal the facility’s supply of raw gold. Despite a valiant attempt by the manager to keep them out of the vault, they broke in. However, before they could escape with the gold, the SWAT Kats and the Enforcers arrived, triggering a brief battle which saw both Metallikats severely damaged.

Native to Anakata Island this resident knew of the fire demon Volcanus and the Talisman Stone that kept the creature asleep. He vainly attempted to stop developmental construction in the hopes of preventing the Talisman from being destroyed. Being dubbed as simply “a buncha superstitious houdjo nonsense,” by Mayor Manx his attempts failed.