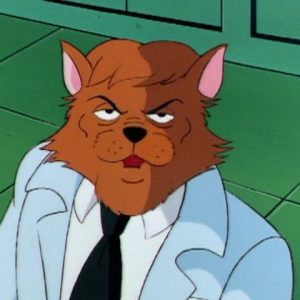 Yes, I understand. I will do everything in my power to help you conquer this world.

Employee of MASA, Dr. Street was in charge of the Kat Sat 1 project.  Unfortunately for him, when his satellite returned, it was coated with a “sticky slime” which contained an alien insect like creature called a Ci-Kat-A.  Bitten by the Ci-Kat-A, Dr. Street was hypnotized into helping his “new master” and later transformed into a Ci-Kat-A like being himself.  It is unknown if Dr. Street is still alive as he had fallen from Megakat Tower and was never seen again.  (An episode was planned involving him but never made.)