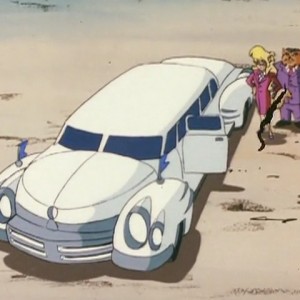 Better let me drive Mayor. I know just where to find you something to fight back with. - Deputy Mayor Callie Briggs

Mayor Manx’s Limo is a white luxury stretched sedan used by Manx as his primary mode of transportation. It is driven by an unnamed, beady-eyed chauffeur. On at least one occasion, the limo was eaten by Dr. Viper’s bacteria monsters. Manx got a new, identical limo later on however.