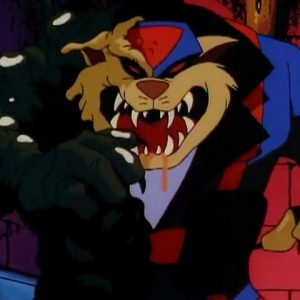 Wish me luck buddy, if this doesn’t work we’re all going to look like you. - Razor

At one point during the SWAT Kats’ mission to retrieve the anti-mutagens from Megakat Biochemical Labs, T-Bone was bitten on the shoulder by a tiny mutant. The bite itched, and although he complained about it constantly, T-Bone ignored Razor’s suggestion that he see Dr. Konway about it. What neither SWAT Kat realized was that the little mutant’s bite had gotten some Katalyst X-63 into the big SWAT Kat’s blood. Upon arriving at the labs, the katalyst finally took effect, partially transforming T-Bone into a half kat, half frog monster, who became feral and attacked Razor relentlessly, not recognizing his partner.

In order to defeat his former partner without killing him, Razor used an Octopus Missile fired from a shoulder-mounted launcher to pin the mutated SWAT Kat to the wall, knocking him unconscious. Razor was thereafter left to continue the mission (and face a giant Dr. Viper) on his own, without T-Bone. The mutated T-Bone remained pinned to the wall for the remainder of the ordeal, but was returned to normal along with everything else that had been transformed by Katalyst X-63 when Razor detonated the canisters of anti-mutagen in Dr. Viper’s hands, causing it to spread throughout the city.