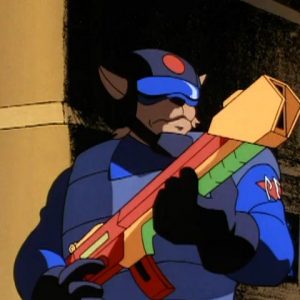 Armed security guards at Puma-Dyne in the alternate dimension. They came in two distinct varieties; more conventional guards in uniforms with peaked caps, and guards in full body armor similar to that worn by Enforcer commandos but with a different color scheme and the Puma-Dyne logo (a stylized “PD”) on their outfits in place of the Enforcer “M” logo. When the SWAT Kats, having been catapulted accidentally into the alternate dimension, broke into Puma-Dyne in an attempt to acquire the Mega-Detonator before their evil selves did, they made a point of avoiding open conflict with both of the guards they encountered, while the Dark SWAT Kats went out of their way to engage them and knock them out.

Note that since Puma-Dyne’s security personnel are only seen in the alternate universe in The Dark Side of the SWAT Kats, it is unknown if how they dress there is how they dress in the “main” universe.