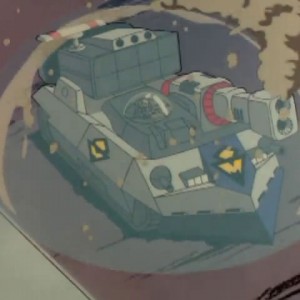 Sorry sir, Puma-Dyne built that tank to your specifications. It’s designed to handle anything. - Enforcer Sergeant

This vehicle was developed and built by Puma-Dyne Industries to Commander Feral’s exact specifications. It was equipped with heat seeking missiles, numerous laser weapons, and a force field, making it nearly invincible. It was stolen by technology pirate Hard Drive, and was destroyed by the SWAT Kats when Hard Drive attempted to get away in it.